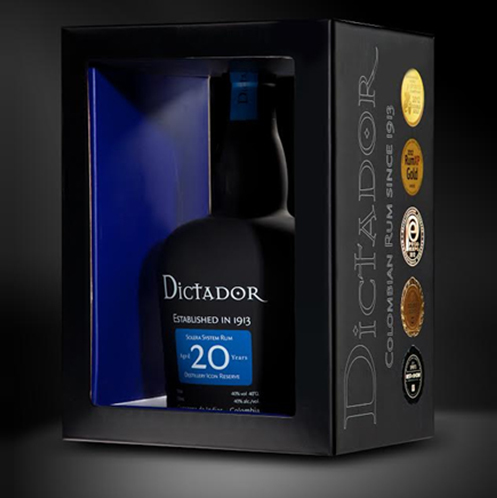 Dictador, the award-winning Colombian rum producer, is pleased to announce that its 20 Years Solera System rum has been selected as the most desired in the 2017 Flaviar Community Awards. This award comes shortly after 20 Years Solera System won double golds in the San Francisco World Spirits Competition and Wine and Spirits Wholesalers of America, plus winning over ten gold and double gold medal awards from various international competitions.

The 2017 Flaviar Awards competition included spirits entries from around the world in various categories from dry gin to rum, and bourbon, single malt and Irish whiskies. All entries were judged on Flaviar’s Tasting Box spirits, bottle sales, and the Flaviar tasting team’s own input. Flaviar has now launched their Flaviar Awards 2017 Tasting Box with all five winners.

Marek Szoldrowski, President of Dictador Europe, said: “Winning this award plus the many others in such a short space of time is a testament to Dictador’s dedication to making ultra-premium, high quality spirits. Dictador 20 Years Solera System rum is a toast to our masterful blending of traditional high-quality distilling methods with the best ingredients possible. We’re proud to expand Dictador’s reputation as the world’s most awarded rum and as one of Colombia’s best distillers.”

Dictador 20 Years Solera System rum is made from the fermentation of virgin sugar cane honey, distilled partly in copper alembic and partly in steel continuous column, to achieve a medium body rum. It’s then aged in pre-used oak barrels using the solera method and finally bottled under the highest quality control to ensure all the secrets are contained in the liquid flavour. Solera’s taste profile is intense and dark, with red-brown tones. The nose offers a soft caramel toffee flavour, coupled with vanilla, smoked honey, dry seeds and a roasted coffee aroma. Combined it is a rich and rounded oak sensation. In the mouth, the rum is very soft and round, yet big and full-flavoured. Its rare texture grows stronger and deeper as it decants in the glass, making its complexity exceptionally unique. Dictador 20 Years Solera System (700 ml, 40 per cent ABV) is available online and sold in all fine retailers.